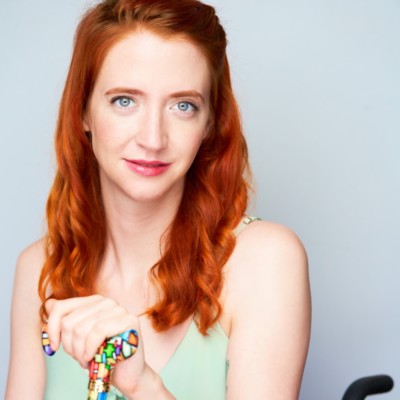 Born in El Paso, TX, Carey Cox received a BFA in Musical Theatre from Santa Fe University of Art and Design, followed by an MFA in Acting from UNC Chapel Hill.  During her time at UNC, Carey performed as a company member in ten productions at PlayMakers Repertory Company.  She moved to New York City in 2016 and due to symptoms of Ehlers Danlos Syndrome, she began using mobility aids and transitioned to auditioning as a disabled actor.  In 2017 she understudied the role of Laura in the Broadway revival of The Glass Menagerie starring Sally Field.  In 2019, Carey played Laura in The Glass Menagerie at the Guthrie Theatre directed by Joseph Haj.  Carey has also performed in productions at Syracuse University, Nashville Children’s Theatre, and starred in Barefoot in the Park at Queens Theatre.  She is also a playwright and has had work featured at Queens Theatre, Lincoln Center, and the Bird Festival in Tokyo, Japan.  Carey currently plays Rose Blaine on Hulu’s The Handmaid’s Tale, and earlier this year she wrote and performed in the 2022 Viacom CBS Diversity Showcase.  Carey also sings, plays guitar, performed standup comedy for six years, is a trained visual artist, and enjoys advocacy and volunteer work, including serving on the volunteer board of NYC nonprofit Born Dancing.  She lives in New York City with her fiancé Joe Kibler, three beloved cats, and an adorable dog.