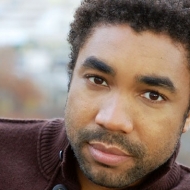 Edward O’Blenis was born in New York City but grew up in the country’s Pacific Northwest where he began acting in High School. For college, he attended Cornish College of the Arts in Seattle, receiving a BFA in Acting/Original Works Playwriting and Directing and then went on to earn an MFA in Acting from the prestigious Yale School of Drama. While a student at Yale, he had leading and supporting roles in over twenty productions including Pericles in Pericles, Tom Joad in The Grapes of Wrath, and Othello in Othello. This classical training later helped him to perform in a vast array of theaters across the country such as The Westport Country Playhouse, Bay Street Theater, Playmakers Rep, The Delaware Theater Company, The Actor’s Theater of Louisville, Chicago Shakespeare Theater, Cape Fear Regional Theater, A Contemporary American Theater Festival, The Gulfshore Playhouse, Passage Theatre, New Century Theatre, The Actor’s Shakespeare Project, The Hangar Theater, Seattle Children’s Theatre, The Intiman, Yale Repertory Theater, The Nebraska Shakespeare Festival, Triad Stage, People’s Light and Theater, Crossroads Theater Company, Premier Stages and with many notables roles like Walter Lee Younger in A Raisin in the Sun, Othello in a professional production, originating the role of Ron Hutchinson in Bruce Graham’s play Sanctions and Honey Camden in Joanne Woodward’s last directorial production of A Member of the Wedding, among others. At home he has been fortunate enough to perform with some of New York City’s finest Theater companies such as Bedlam, Red Bull Theater, Prospect Theatre Company, and Target Margin Theater with readings and workshops at The Public Theatre, New York Theater Workshop, The New Group, The Roundabout, Drama League and many many others. He can also be seen on the big and small screen guest starring alongside Ice T on television’s Law and Order SVU, recurring on Bill Nye the Science Guy, appearing in Sundance alongside Anna Farris in Eden, and has just recently finished portraying Ralph Ellison alongside Elisabeth Moss and Michael Stuhlbarg in the upcoming Shirley Jackson biopic directed by Josephine Decker. He is very proud to be a member of The Actors Center and to have the chance to explore the craft with so many talented artists. To learn more, please visit www.edwardoblenis.com.