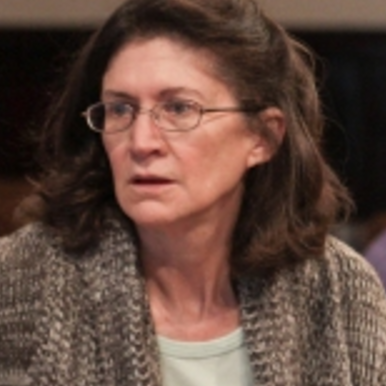 Molly Regan has been seen on Broadway in August: Osage County, The Crucible, and Stepping Out. In London’s West End, she appeared in Love Song. She has been a member of the Steppenwolf Theatre Company Ensemble since 1985 and was most recently seen there in her self-penned one-woman show The Accidental Curator. Her dozens of Steppenwolf productions include leading roles in Another Time (Jeff Award), David Copperfield, Tribes, Three Sisters, The Glass Menagerie, Aunt Dan and Lemon, You Can’t take it With You, Miss Julie, Cat on a Hot Tin Roof, The Herd, Dead Man’s Cell Phone, Love Song, and many more. She has received four Jeff Award nominations. Off-Broadway: Booth, The Two Gentlemen of Verona, The Seagull, Say Goodnight, Gracie, Etiquette, and Personals. She has spent nine seasons at the Williamstown Theatre Festival appearing in the works of Shakespeare, Sheridan, Giraudoux, Brecht/Weill, Williams and Miller, among others, and has worked at the Kennedy Center, McCarter Theatre, Hartford Stage Company, Philadelphia Drama Guild, Westport Country Playhouse, Weston Theatre Company, and Virginia Stage Company. She has also been nominated for “Best Actress” awards from The Connecticut Drama Critics Circle and The Berkshire Theatre Awards. Her film appearances include Confessions of a Shopaholic, The Emperor's Club, and Pollock, as well as Woody Allen's Bullets Over Broadway, New York Stories, and Radio Days. Television credits include a regular role on The Education of Max Bickford as well as appearances on The Sopranos, Cosby, Ed, Newhart, and several episodes of Law and Order. She appeared as soprano soloist in symphony orchestra performances of Handel's Messiah and the Fauré Requiem. She has taught at the School at Steppenwolf and master classes for the University of Houston.