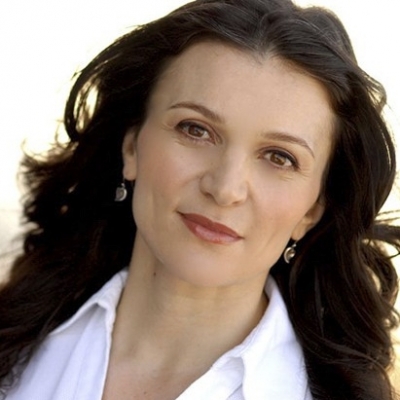 Antoinette LaVecchia is an award winning actress and playwright, most recently a member of the cast of Torch Song on Broadway.

Onstage, Antoinette has performed on and Off-Broadway & at numerous regional theaters often making “Best Of…” and “Top 10” lists at the end of the theatre season. She was featured on Broadway in A View From The Bridge (Cort Theater) starring Scarlett Johansson and Liev Schreiber.  In NYC, she has performed at Manhattan Theatre Club, The Public Theater, Lincoln Center Inst., Primary Stages, SoHo Playhouse, Cherry Lane, The Flea, Urban Stages and more. Most recently, she has been seen in back to back world premieres: Project Dawn (People’s Light), The Blameless (The Old Globe), A Comedy of Tenors (McCarter & Cleveland Play House), I Loved, I Lost, I Made Spaghetti (her award-winning solo performance, in which she originated the role of “Giulia” at Hartford Theatre Works, George St. Playhouse, Asolo Rep & Cincinnati Playhouse in the Park), Two Point Oh (59E59 Theaters, *NY Times Critics Pick), Stella and Lou (Merrimack Rep), You Say Tomato, I Say Shut Up! (national tour), and Tough Titty! (Williamstown Theatre Festival).

Antoinette’s critically-acclaimed comedic one-woman show, HOW TO BE A GOOD ITALIAN DAUGHTER (In Spite of Myself) directed by Ted Sod, had sold out houses at The Cherry Lane in NYC after a sold out performance at Ars Nova and was performed in earlier versions at Urban Stages and the Midtown International Theatre Festival, directed by Jesse Berger and Ludovica Villar-Hauser, respectively. The piece was also chosen to be in The Culture Project's Women Center Stage Festival, at the Perry Street Theatre and at CenterStage at Fitchburg State College. In Los Angeles, the show raised money for The Collective’s fundraiser, the west coast alumni group of Tisch’s Graduate Acting Program. She was awarded the Anna Sosenko Assist Trust Grant to further her development as a writer/performer.

Antoinette has been developing a new piece with Parity Productions and Ludovica Villar-Hauser, VILLAGE STORIES: a collage of Italian ancestry stemming from a small village in Southern Italy—proving that the universe can be seen in a grain of sand. Collaborating with the extraordinary musician John T. La Barbera, the piece weaves music and storytelling to share timeless stories.

She also taught GAMES/IMPROV & directed the Games Project at NYU Grad Acting for 7 consecutive Fall Semesters, as well as a specialized workshop, The Kinetics of Literature for 3rd year actors with Jim Calder and taught various classes at The Actors Center, NY Institute of Technology, Fordham, NYU in Florence and master acting classes for visiting high school students from around the country. In 2006, she was chosen to go to Addis Ababa, Ethiopia by WWO, to develop a theatre piece with 40 HIV+ children along with the  talented team of Lisa Rothe, James Hallett, and James Haven.

She is a Drama League Directing Fellow, a Fox Fellowship recipient and a member of the League of Professional Theater Women.