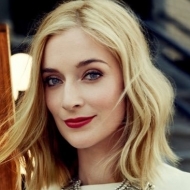 Caitlin FitzGerald is an actress, director and writer. As an actress her theater credits include, Hedda in ‘Hedda Gabler’ (Private Theater Company), Juliet in ‘Romeo and Juliet’ (Shakespeare Santa Cruz), and ‘The Optimist’ (Abingdon Theater). Her film credits include ‘It’s Complicated’, ‘Newlyweds,’ ’The Fitzgerald Family Christmas’, ‘Taking Woodstock’, ‘Damsels in Distress’, ‘Manhattan Romance,’ ‘Adult Beginners’, ‘Always Shine’, ‘This is Your Death,’ and the upcoming ‘The Man who Killed Hitler and then the Bigfoot.’ Her television credits include ‘New Girl,’ ‘Law and Order:SVU,’ ‘How to Make it in America,’ ‘Gossip Girl,’ ‘Rectify,’ ‘UnReal,’ ‘Succession,’ and the role of Libby Masters in Showtimes acclaimed series ‘Masters of Sex.’ Currently she can be seen in ‘Sweetbitter’ on Starz.  Caitlin co-wrote and starred in the independent feature ‘Like the Water.’ She has directed two short films, ‘The Girl with the Jacket’, and ‘Mrs Drake.’ Caitlin’s training includes  New York University’s Tisch School of the Arts and The Royal Academy of Dramatic Arts in London. She is a proud member of the Actors Center.