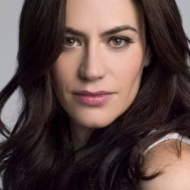 Maggie Siff is currently starring as the female lead on Showtime’s Billions, opposite Damian Lewis and Paul Giamatti. The show just had the best series debut performance ever for a SHOWTIME original series, and Siff has garnered critical acclaim for her role as “Wendy Rhoades.” The Wall Street Journal said “Ms. Siff is a fascination…” while The Hollywood Reporter said “…Siff is the real star of Showtime's new financial sector-set drama”.

Siff is well known to audiences for her role as “Tara Knowles” on the hit FX series Sons of Anarchy. For her role, she received two Critics’ Choice Award nominations for “Best Supporting Actress in a Drama Series.” She also starred in the first season of Mad Men playing Don Draper’s mistress, “Rachel Menken,” for which she received a Screen Actors Guild Award nomination for “Outstanding Cast in Television Series Drama.” Her other television credits include: Nip/Tuck, Life On Mars, Grey’s Anatomy and Law & Order.

On the big screen, Siff recently starred in and executive produced the independent film A Woman, A Part, which premiered in competition at this year’s Rotterdam Film Festival.

She also starred in the independent film, The Sweet Life, opposite Chris Messina, which premiered at the 2016 Los Angeles Film Festival, Columbia Pictures’ The Fifth Wave opposite Chloe Grace Moretz and Sony Pictures One Percent More Humid.

In 2014, she appeared in Concussion, which premiered in competition at the Sundance and Berlin Film Festivals. At Berlin, the film won a Teddy Award Jury Prize as an outstanding film about LGBT themes and its director Stacie Passon was nominated for Best First Feature by the Independent Spirit Awards. She also starred in Tim Blake Nelson’s Leaves of Grass opposite Edward Norton. Her other film credits include Paul McGuigan’s Push opposite Djimon Hounsou and Judd Apatow’s Funny People opposite Adam Sandler.

Siff is an established theater actress and she mostly recently played the lead role of "Kate" in the Theater for a New Audience’s production of The Taming Of The Shrew. Her other credits include the title role in The Escort at the Geffen Playhouse, and the lead in OR at New York's Women's Project. She also starred in Ethan Hawke’s Lie Of The Mind opposite Alessandro Nivola and Josh Hamilton at the New Group. Siff appeared in Richard Nelson's Frank's Home at Playwrights Horizons and Ruby Sunrise, performed at the Public. She received a Jefferson Award nomination for her performance in Dollhouse at Chicago’s Goodman Theatre and has also worked frequently in Philadelphia, where she won the Barrymore Award for a production of Ghosts.

Originally from New York City, Siff graduated with an M.F.A. from NYU's Tisch School and a B.A. from Bryn Mawr College.