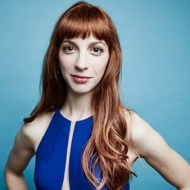 An actress across film, television and theater, Molly Bernard is most recognizable for her role as feisty publicist Lauren Heller on TV Land’s “Younger.” The comedy series, created by Darren Star, is in its sixth season. Bernard also co-stars as the flashback version of Shelly Pfefferman (Judith Light) in the Emmy-winning Amazon series “Transparent.” She currently can be seen on the NBC series “Chicago Med,” where she portrays an intelligent and overconfident med student.

Last summer, Bernard completed production on the indie film “Otherhood,” directed by Cindy Chupak. Her diverse film credits include “Sully” opposite Tom Hanks and directed by Clint Eastwood, “Pay it Forward,” directed by Mimi Leder, and “The Intern,” directed by Nancy Meyers. On television, Bernard co-starred opposite John Goodman in Amazon’s comedy series “Alpha House” and has appeared in HBO’s “High Maintenance” and NBC’s “Blindspot.”

In 2016, she made her off-Broadway debut in the Soho Rep’s “Revolt. She Said. Revolt Again” with critical acclaim. Bernard received her Bachelor’s degree from Skidmore College and her MFA from the prestigious Yale School of Drama. She has also studied at the Moscow Art Theater and trained extensively and performed with SITI Company. In 2014, Bernard received the Leonore Annenberg Performing Arts Fellowship from the Lincoln Center Theater. Bernard credits her love of acting from her grandfather, Joseph Bernard, whom she began studying with at the age of six. She currently resides in New York City.