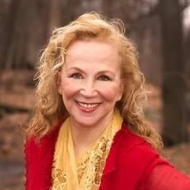 Rutanya Alda is an actress with more than 50 years of experience in film, television, and theater. She has performed in over 100 screen roles and many plays throughout her career, among which are the Academy Award winning Deer Hunter, Racing with the Moon as Sean Penn's mother, Brian De Palma's Greetings and Hi, Mom! with Robert De Niro, Elia Kazan's The Last Tycoon, and the cult classic Mommie Dearest, about which she has written a critically acclaimed book, The Mommie Dearest Diary. She recently helped premiere the staged-reading of John Guare's More Stars Than There Are In Heaven at the Provincetown Tennessee Williams Theater Festival, and appeared as well in the New York premiere of Sarah Simon's The Portrait, the revival of Ron Clark and Sam Bobrick's Murder at Howard Johnson's at Theatre Row, and Tennessee Williams' The Fat Man's Wife. She is a member of the Academy of Motion Pictures Arts and Sciences. She is also a member of AEA, SAG-AFTRA, The Actors' Center, and Paul Calderon and David Zayas' theater company Primitive Grace in New York City. She has just written a one woman show based on her childhood living in a displaced persons camp in Europe after World War II.